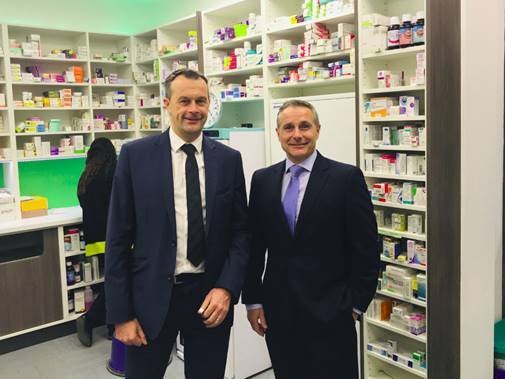 Glasgow-based M&D Green Group, one of Scotland’s largest independent pharmacy operators, has secured an eight-figure funding package from HSBC UK to aid its growth across Scotland.

The deal included a seven-figure loan which M&D Green Group has used to acquire Thomas McLean & Son’s five-unit pharmacy business. The deal takes the Group’s total number of units in Scotland to 23.

As part of the acquisition, M&D Green Group aims to refurbish and re-brand each of the five units over the next 12 to 18 months. It will also take on Thomas McLean & Sons existing 50-strong workforce, taking the Group’s total employee numbers to approximately 250.

Martin Green, owner of M&D Green Group and Chair of Community Pharmacy Scotland, said: “We have ambitions to grow the business across Scotland and the financial backing from HSBC UK has allowed us to take a big step forward with our expansion plans. The bank’s team kept the deal simple and straightforward, allowing us to complete the acquisition quickly after we first engaged with them.”

Grant Bett, relationship director for HSBC UK in Scotland, said: “Our strategy is to support ambitious businesses in Scotland and Martin demonstrated clear and ambitious plans for growing M&D Green Group across the country. We are delighted to complete a full re-finance and acquisition funding deal with him, to support in their programme for growth, refurbishment and rebranding.”

The finance was allocated from HSBC UK’s national SME Fund, which aims to actively support UK SMEs. The new £12 billion SME Fund has recently been announced by HSBC UK, with £650 million committed to supporting SMEs in Scotland.

M&D Green Group were advised by Campbell Dallas Accountants on the acquisition of Thomas McLean Pharmacies, who also provided advise and guidance on funding the transaction and re-banking.

M&D Green were advised by Peter Duff – Morrisons Solicitors, with MacRoberts advising HSBC UK on all aspects of the transactions.