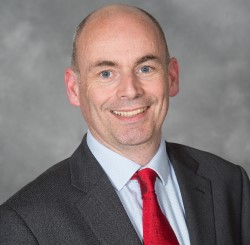 News of this significant growth coincides with 30th anniversary of the business.

Over the past three decades, Optos has continued to evolve and broaden its offering and now has four core imaging platforms – the Daytona, California, Monaco and Silverstone – with more than 22,000 devices across the world using the technology.

Its most recent addition is the first ultra-widefield (UWF™) CE-marked AI which facilitates early detection and management of diabetic retinopathy (DR), a leading cause of blindness among adults worldwide.

Based in Dunfermline, Fife, the business was founded in 1992 by Douglas Anderson after his five-year old son lost his sight in one eye due to a retinal detachment despite regular eye examinations.

Determined to enable eye problems to be detected as early as possible Douglas set out with the goal to make a patient-friendly device to capture an ultra-widefield image of the retina, through this Optos developed a device capable of ultra-widefield (UWF™) high resolution digital images called optomap.

These images capture approximately 82% and 200◦ of the retina, something no other device can do in a single capture.

The optomap systems can be found in many Optometrist’s and Ophthalmologist’s practices across the world, as well as in hospitals including the world`s leading teaching hospitals.

The business has continued to invest significantly into research and development, and for year ended March 22 this amounted to $18.6m, up more than 40% on the previous year, reinforcing the commitment to continually improve its technology.

Globally, more than 500 people are employed by Optos in a variety of roles including R&D, manufacturing, clinical research and sales. Over 2,000 published and ongoing clinical trials have also been conducted while thousands of case studies and testimonials reinforce the long-term value of optomap imaging and OCT in diagnosis, management and treatment, and supporting patient engagement.

Rob Kennedy, CEO of Optos said: “We are proud of what Optos has achieved over the past three decades. We have remained true to Douglas’s core purpose of improving patient outcomes by providing the best imaging technology and so reduce the risk of sight loss.

“In pursuit of this purpose, we pioneered the only single capture ultra-widefield (UWF™) retinal imaging, and now more than 22,000 optomap® devices are in use worldwide. We have delivered significant growth, continued to develop our technology, and ultimately enabled our customers to help save the sight of their patients.

“I want to thank all the Optos team for their innovation and hard work over the last 30 years. It’s this dedication and commitment that has helped shape Optos to become the business it is today and we look forward to continuing to push the boundaries in support of our customers and their patients.”