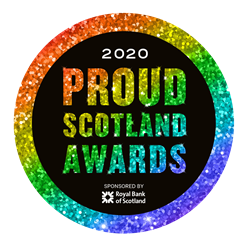 The Proud Scotland Awards has announced that The Royal Bank of Scotland will be the headline sponsor for the 2020 event which will take place in Edinburgh this autumn.

“These awards celebrate the diversity, respect and sense of community that exists within Scotland and offers an opportunity to recognise the individuals and groups working hard to truly make a difference for the LBGT+ community across the country.

“It also offers the chance for people to tell their story and champion the organisations affecting positive change in their lives.”

The awards bring together the unsung heroes from LGBT+ communities all over Scotland and the public can nominate individuals or groups and this year a total of 20 prestigious awards will be up for grabs on the night.

From those nominations, an independent judging panel will decide which of the nominees will be recognised for the fantastic work they do. There will also be a top honour given out – the outstanding contribution to LGBT+ life. This will go to the person who has excelled and gone the extra mile for LGBT+ communities in Scotland or internationally.

The Proud Scotland Awards were created with the sole aim of ensuring that LGBT+ individuals, straight allies and companies that have supported equal rights are given the opportunity to share their stories and shine.

Money raised at the awards dinner will be used by Pride Edinburgh and Glasgow’s Pride Mardi Gla to support LGBT+ campaigns in Scotland.

Peter Ferguson, Proud Scotland Awards director, added: “We are very proud to be working with The Royal Bank of Scotland and for the encouragement and support they have shown the Proud Scotland Awards and the LGBT+ community in Scotland. We are delighted to have them on-board as our key sponsor, helping us reward those who deserve recognition for championing inclusivity and diversity across Scotland.”

In light of COVID-19 nominations have been extended till Friday 30th May 2020. Members of the LGBT+ community make up a large percentage of NHS medics and also key workers, so in particular, we are urging people to ensure that those on the frontline are nominated for the Public Service award.

A total of 20 awards will be given on the night and people are asked to visit www.proudscotlandawards.com  to nominate someone or an organisation who has gone the extra mile to help the LGBT+ community.