UKHospitality has today published an analysis that reveals that if a tourist tax was introduced across the country it will lead to a hit to the Scottish economy of over £200 million and the loss of nearly 6,000 jobs. The report indicated that the pain of the Transient Visitor Levy which the Scottish Government is currently consulting on, would be felt all across Scotland, but the analysis shows the hardest-hit areas are Edinburgh, Glasgow and the Highlands.

The tax will also increase the costs of domestic tourism for Scots and deter visitors from overseas.

Kate Nicholls, CEO of UKHospitality, said: “This ill-thought-through proposal will damage Scotland’s reputation as a world-class tourism destination, increase costs for Scottish people and lead to a loss of jobs and investment at a critical time for the sector.

“The hospitality sector is already over-taxed, with sky-high business rates and one of the highest VAT rates in Europe. A new tax will put businesses, the vast majority which are SMEs, under even greater risk. It is time that this proposal was shelved and for the Scottish Government to discuss with business how we can secure a bright and sustainable future for Scottish business.” 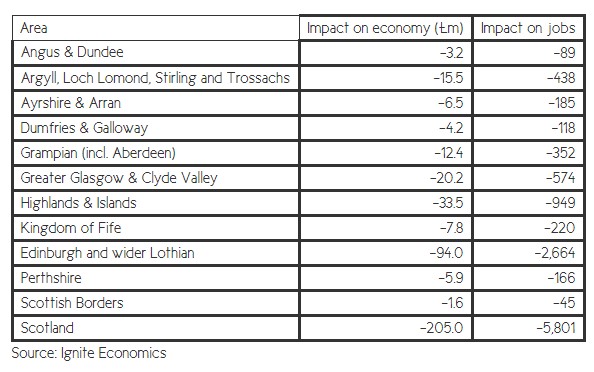 Stuart McCallum, RSM’s head of food and drink in Scotland, commented: “The outcome of the ‘tourist tax’ consultation will be eagerly watched by many in the leisure and hospitality sectors. But this concern also stretches across into the food and drink sector which has embraced the appeal of provenance for Scottish brands and the sector has expanded in the experiential with activities, such as whisky and gin distillery tours.

“The European tourism association (ETOA) embarked on a review into the impact of tourism taxes following the announcement of the Scottish government consultation. The findings were quite enlightening with a key recommendation warning of the cumulative effect of local taxes on competitiveness; which is a major concern for Scottish businesses.

“The impact of some local councils bringing in the tourist tax and some not; may impact visitor destination choice. But also, if large cities, like Edinburgh and Glasgow, implement the levy, this could have a knock-on-effect on wider tourism across the Highlands. So, the approach, if adopted, needs to be carefully considered to mitigate risk to thriving sectors in Scotland.”

He added: “The report also flags that tax should be ‘easy to pay, collect and cost-effective to administer’; and sufficient notice up to two years should be given to allow businesses to implement the changes effectively. Let hope key responses to the consultation and wider best practice shape any future policy.”

Jim Burberry, head of VAT and indirect taxes in Scotland, said: “It’s good to see that issues and concerns about the interaction between any levy and VAT have been recognised within the consultation. It will now be interesting to see the outcome of future local, devolved and national tax policy as regards that interaction so that affected businesses can ensure their systems and accounting practices can cope.”

The Chartered Institute of Taxation has also said Scotland’s councils need clarity about how they will be expected to pay for the costs of implementing Scotland’s new tourist tax.