Scottish Widows: Female entrepreneurs are not saving for retirement

Over a third of female entrepreneurs in Britain are not saving any money for retirement, a new report by Scottish Widows has found. The Scottish Widows Women and Retirement Report revealed that 46% of self-employed women save the minimum recommended level for retirement, compared to 56% of women who are employed by an organisation or company.

The report revealed that more than two-thirds of women aged 22-29 (67%) are not saving enough for retirement and 25% aren’t saving anything at all. Men of the same age are better prepared, with 46% saving adequately for retirement and fewer not saving at all (17%). The current minimum employer pension contribution through auto-enrolment is 8%, however, Scottish Widows suggests a combined 12% employer and employee contribution as an adequate level of saving.

The report also indicated that four in 10 (40%) women aged 22-29 who have a pension say they don’t save as much into it as they would like, because they want ready access to money in case of emergencies. This compares to just under a quarter (24%) of men aged 22-29. Around 357,000 women in this age bracket would start saving into a pension for the first time if they could have the option to access some of their savings should they need it.

However, the report indicates that this group of self-employed women are among the best savers in the UK, as their savings rate of 16% is higher than that of self -employed men, whose rate is currently at 14%. 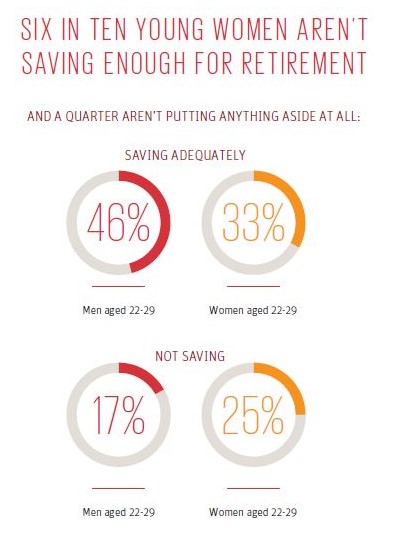 Similarly, the average savings rate is higher than the average for both employed men and women, at 12% and 10% respectively.

Scottish Widows has said the polarity of earnings among female entrepreneurs may explain the difference in savings, as 80% of self-employed women who save inadequately earn less than £20,000 a year.

The Women and Retirement report also indicated that women in their 30s who have moved from being an employee in their 20s to being self-employed today will have missed out on auto-enrolment at both stages.

Jackie Leiper, Scottish Widows pensions director, said: “A growing number of women are taking charge of their careers by launching their own businesses or working as freelancers – 700,000 have set up on their own since 2005, and 1.7 million women are now self-employed.

“This raises real concerns when we consider that women are historically underprepared for retirement and that self-employed women do not benefit from the safety net of auto-enrolment, which has helped boost female employees’ savings since its introduction.”