opinion
Homeowners and creditors in Scottish bankruptcies, from the 3rd of April 2017, will pay substantially more when a home is sold by the Accountant in Bankruptcy (AIB) in a sequestration, writes Alan McIntosh of the Govan Law Centre.
The massive fee hikes, being proposed by the Bankruptcy Fees (Scotland) Regulations 2017, will see the AIB increase their fees when selling a debtors home by as much as 188 per cent.What this means is where a debtor’s home is sold, more of the money realised from the sale will now go to the AIB, a government quango, and less will go to creditors or be returned to the debtor after creditors have been paid.

What makes these increases the more shocking, is they come two years after the Scottish government changed the law to make Scottish debtors pay for longer: on the pretext it was necessary to increase returns to creditors.

However, the AIB’s concerns for increasing dividends appears to have subsided with the new proposed fee increase, where the Scottish government quango will max out its potential revenue from the sale of family homes.

As the table below shows, under the old rules the AIB took significantly less to what is now being proposed under the new regulations, with the increase being as much as 188 per cent, where there is £50,000 equity in a home. 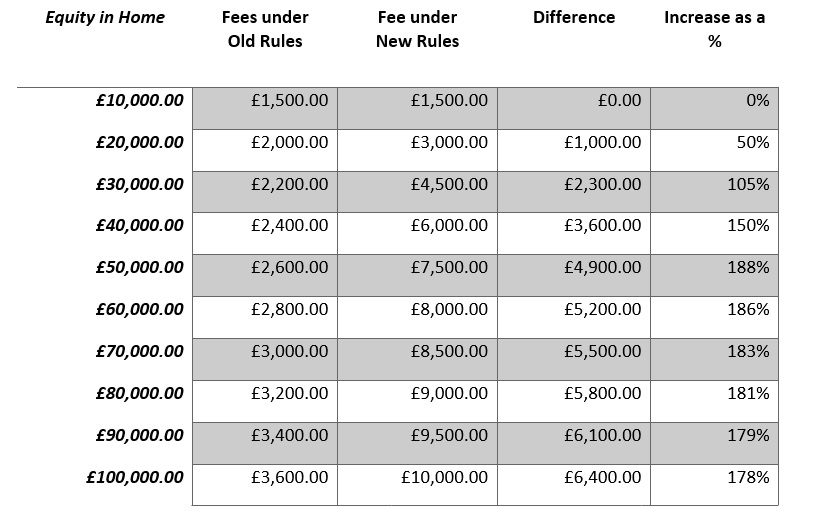 AIB Costs and Full Cost RecoveryThere is a growing concern what lies at the heart of these fee increases, and indeed the Scottish government’s decision that debtors should pay for longer, is the need to fund the Accountant in Bankruptcy, an organisation whose entire business model appears to be to increase fees when revenue drops from falling caseloads, without making any corresponding efficiency savings to reflect their reduced workload.

As the graph below shows, despite the level of debtors seeking formal debt remedies over the last nine years declining, there has been no corresponding reduction in the AIB’s staffing levels, or costs overall to reflect this. 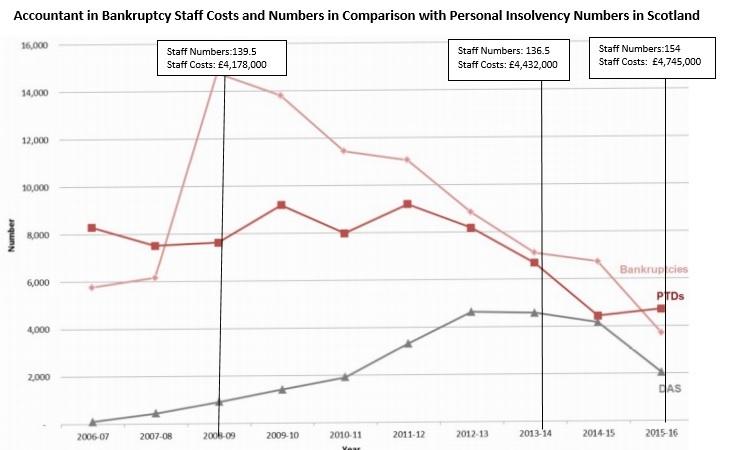 The irony of all this is, that many of the cases that will be impacted by these increases will be creditor petitions, where it is the creditors who makes the debtor bankrupt. These tend to be local authorities, who do so to try and recover unpaid council tax. The result will be less funds will be returned to these local authorities, who have suffered budget cuts imposed by the Scottish government, whilst the AIB, a government quango has been allowed to insulate itself from cuts by increasing fees on debtors, creditors and the personal insolvency industry.Funding of Personal Insolvency

It is clearly time there was an open discussion about how personal insolvency in Scotland is funded and whether a policy of full cost recovery is sustainable, whilst the AIB make no cuts to their own staffing levels and costs.

Until there is such a discussion, there should be no further fee increases for the AIB authorised by the Scottish Parliament.

Already, it has been shown that as a result of the introduction of the Bankruptcy and Debt Advice (Scotland) Act 2014, the number of debtors applying for sequestration and the Debt Arrangement Scheme (DAS) has reduced (50 per cent reduction in relation to DAS). Over the long term this will mean a reduction in fees recoverable by the AIB, which whilst they continue to pursue a policy of full cost recovery and no cuts to their own services, can only result in a greater shortfall that will need to be met by future fee increases.

These fee increases will only result in remedies becoming less accessible by debtors and creditors and result in a further decline in numbers using the remedies.

At some point we must ask who is the intended beneficiaries of Scotland’s personal insolvency regime?

The regulations were laid before Parliament on the 20th February 2017 and are a negative procedure instrument. The Lead Committee is the Economy, Jobs and Fair Work Committee. The report date for the instrument is the 27th March 2017.