Independent restaurateurs are driving forward the food and beverage market in Glasgow, according to international real estate advisor Savills. 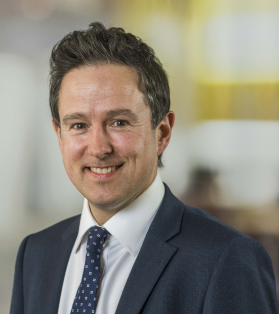 John Menzies, director in the retail team at Savills in Glasgow

Highlights in the year include the openings of: Sugo, the eagerly awaited new pasta restaurant on Mitchell Street and sister restaurant to Paesano; Bo and Birdy, a new modern brasserie at Blythswood Square headed up by Gillian Matthews, Scotland’s first female executive head chef at a 5-star hotel; and Mezcal, a new Mexican taqueuria and bar on Hope Street.

John Menzies, director in the retail team at Savills in Glasgow, said: “Independents have been more cautious around how quickly they grow, compared with some of the larger chains. For many independents, they have been priced out of premium rental locations and instead opted for quirky locations which are lower in rent, but still close enough to the centre to attract customers. As a result, many of these businesses have demonstrated positive turnover growth which has in turn encouraged more independent businesses to open.

“We expect to see another busy year for the casual dining sector leasing market in 2020, but the focus of demand is continuing to evolve in terms of property type, size and location. A number of interesting national brands are expected to open in 2020, including Franco Manca, Mowgli, Pho and Wolf. With margins tightening in the face of rising operating costs, savvy occupiers are now looking for smaller units of 1,500-3,000 sq ft, often in quirky locations and in buildings with architectural character.”

Additionally, the pub sector is expected to experience growth in 2020, having traditionally grown at a slower pace compared with the restaurant market. For example, one of the UK’s largest pub businesses Mitchells & Butlers, advised by Savills, are actively looking for sites in Scotland.

Mr Menzies added: “Over the last five years, the pub sector has not seen the same growth as restaurants, so with arguably less saturation in the sector there is room for growth.”

According to Savills, rental values have remained static in 2019 with prime rents reflecting between £35-40 psf.