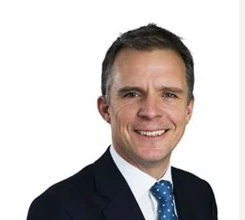 Grant Thornton UK has revealed that Dave Dunckley has been appointed as the firm’s chief executive officer (CEO) for a second term.

In line with the firm’s membership agreement, the partnership voted for Mr Dunckley to serve a second four-year term from December 2022.

Mr Dunckley began his career at Grant Thornton in 1998 and was first appointed as CEO in December 2018, having held a range of leadership roles in the firm since becoming a partner in 2006. Within his first term as CEO, the firm has gone from strength to strength, despite the uncertain trading environment caused by the UK’s departure from the EU and disruptions from the global Covid-19 pandemic, amongst others.

Under Mr Dunckley’s leadership, the firm has renewed its focus on its core markets, enhanced its approach to quality and united its people behind a shared purpose of ‘doing what’s right ahead of what’s easy.’ Throughout his tenure, the firm has increased its investment in people and technologies to ensure consistently higher levels of quality, particularly in audit; and adopted tools and resources which facilitated a seamless transition to remote working. In a recent internal survey, the firm’s approach to hybrid working has shown to improve its people’s productivity and mental wellbeing.

Grant Thornton’s focus on its people recently saw Dave acknowledged as one of Glassdoor’s Top UK CEOs and the firm recognised as a top 10 employer for working families in 2021.

A focus on diversity and inclusion has also seen the firm adopt innovative practices, such as its approach to flexible holidays; as the firm continues to rank amongst the top employers for social mobility and is acknowledged for its commitment to LGBTQ+ inclusion, amongst other recent accolades. Over recent years, Grant Thornton has continued to attract and invest in talent across all parts of its operations, including a record number of trainees last year.

The firm’s financial performance has also seen significant improvement under Dave’s leadership. It’s 2020 accounts showed strong performance throughout the pandemic, on the basis of foundations laid in years prior. Grant Thornton expects to publish even stronger financial performance figures for the year 2021, when its accounts are finalised in the coming weeks.

Dave Dunckley commented: “I’m immensely proud of what the firm has achieved over the past few years and the real momentum we’ve generated moving forward. The renewed sense of confidence and pride in the firm is something I know is shared amongst all our people and I’m honoured to be in a position to lead the firm in its next phase of growth.”

Imogen Joss, independent chair of the Partnership Governance Board at Grant Thornton UK, added: “I’m delighted that the partnership has elected Dave for a second term. Since joining Grant Thornton’s board in 2017 and more recently taking on the role of Chair, I can see the immediate, material impact of Dave’s leadership on the firm not least on the strong culture of the firm and the outstanding results achieved. Whilst Grant Thornton has achieved a considerable amount under his leadership as CEO, I know there is so much more he intends to do and I look forward to the next chapter.”